Captain Watson and the Nelson Arch

Captain Watson and the Nelson Arch: The first monument erected anywhere in the world to the victor of Trafalgar.

A water-colour sketch of the Nelson Arch near Castletownshend, Co. Cork, painted by the man who designed and built the arch in 1805, has resurfaced after 200 years. The arch, destroyed half a century ago, was the first monument erected anywhere in the world to the victor of Trafalgar, Admiral Lord Nelson. It was completed twenty days after the battle, and less than a week after the first news of it reached these islands. The artist, and the builder, was Captain Joshua Rowley Watson RN, then stationed in Castletownshend as the naval officer in command of a large force of Irish Sea Fencibles defending that section of the west Cork coastline against possible French invasion. On hearing of the victory at Trafalgar and the death of Nelson, Captain Watson designed and built, in one day, the rough stone arch, which remained more or less intact until its destruction in 1966, just days after the blowing up of Nelson's Pillar in Dublin. (It had reportedly been attacked and damaged in 1920, but was restored within two years. Townshend family snaps from the 1950s show it in good order.)

A marble tablet once attached to the arch, but now seemingly lost, stated:

'This arch, the first monument erected to the memory of Nelson after the battle of Trafalgar, was sketched and planned by Captain Joshua Rowley Watson RN, and built by him and twelve hundred of the Sea Fencibles then under his command (assisted by eight masons). It was erected in five hours on the 10th of November 1805.'

I first heard of the arch, and of Captain Watson, a decade ago while researching a paper on Nelson's Pillar. By then no trace of the arch was left on the headland on which it had stood overlooking Castlehaven, and the only representation of it that I could find was a photograph taken by a Mr Coghill on 21 October 1896, the anniversary of Trafalgar, and reproduced in the Journal of the Cork Historical and Archaeological Society. It shows the arch largely intact but with vegetation sprouting from it.

Various travel writers of the nineteenth century referred to the arch. Lady Georgiana Chatterton, in her Rambles in the south of Ireland in the year 1838, records seeing 'a lofty arch erected in the memory of Nelson by a party of officers'.

'It is formed of large stones, without cement, and I was told it was constructed after church one Sunday ... This wonderful arch forms a fine object in most of the views about Castletownshend, and as I first saw it towering above the mist which concealed the base of the mountain height on which it stood, its appearance was supernatural.'

'... the rough stone arch set up overlooking the harbour, in memory of the day when a swift frigate bringing up from the south put into here and brought to these islands the first news of Trafalgar'.

There is a local story that a frigate, damaged at Trafalgar, put into Castlehaven, and that its crew came ashore and helped to build the arch. That is unlikely-naval records make no mention of such a ship.

None of the travellers' published accounts of the arch includes an illustration. As the marble tablet claimed that Captain Watson had 'sketched' the arch as well as building it, there surely must be a drawing of it somewhere. I was even more convinced of this when I learned that, besides being a naval captain, Watson was an accomplished water-colourist who, on leave from the Royal Navy, had spent a year (1816-17) travelling on the east coast of North America, recording his journeys in a series of sketch-books. He returned to England in 1817 and died suddenly the following year at the early age of 46. His work was sufficiently well known in America for three of his drawings to be included in two portfolios published in Philadelphia in 1829 and 1830-Picturesque views of American scenery (1819-20) and Views in Philadelphia and its environs (1827-30). In 1829 two of his water-colours were shown in the annual exhibition of the Pennsylvania Academy of the Fine Arts.

Thereafter he seems to have disappeared from public notice until his work was rediscovered in the 1970s by Kathleen A. Foster, then curator at the same Pennsylvania academy. She found that two of Watson's notebooks of his year in America, containing more than 300 drawings and paintings, still existed, one owned by the Barra Foundation, Philadelphia, and the second by the New York Historical Society. Her work on these, and subsequent research in Europe into papers and notebooks in the possession of Watson's descendants, resulted in 1997 in the publication of Captain Watson's travels in America: the sketchbooks and diary of Joshua Rowley Watson, 1772-1818. This is both a biography of Captain Watson and a catalogue of his American sketch-books, plus his American diary. It told me all about Captain Watson, but in its almost 400 pages I could find only one mention of a drawing made in Ireland. Dr Foster deduces that the captain returned to Ireland in 1815 on the basis of a drawing dated that year and entitled Wood scenery on the grounds of Castle Townsend, found among the papers held by the family.

Searching for the sketch

I contacted Dr Foster, who could not remember seeing any drawing of the arch among all the archives to which she had had access. She did, however, help me to get in touch with Captain Watson's descendants. Since Dr Foster examined the papers held by the family they had been dispersed among another generation, and it took me some time to track them down. One descendant, Mrs Sybil Venning, living in Hampshire in England, responded to my letter in 2010; she evinced great interest in the arch and what had happened to it, and promised to look into the papers she had and to contact other members of the family to do the same, to see whether they could find any drawing of the arch. Sadly, there was no sign.

Then, four years later, in the second half of 2014, I had an email from Mrs Venning telling me that she had just found a little painting, which she imagined was what I was seeking. Attached to the email was a scanned image of the painting, showing the arch almost exactly as it was in the 1896 photo, including the greenery sprouting from it. It is dated 1815 on the reverse, in Watson's handwriting, and identified as 'a sketch of an arch on a height near Castle Townsend, in Ireland by J.R. Watson Esqr R.N.' 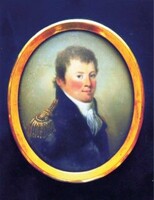 There follows a dedication to his wife: 'At my death I give this little valued drawing to my dear Mary Watson'.

The sketch is barely the size of a postcard, measuring 11.5cm by 7.3cm, but it is 200 years old, it is by the man who built the arch and it is the sort of treasured nugget that researchers can only dream of finding. Now all that remains is to track down the captain's drawings on which the arch was based, and any other works by him during his three years in Ireland.

'Made an important contribution to American landscape painting'

After publication of Dr Foster's research, interest in America in Captain Watson and his work-among the earliest depictions of the east coast settlements-increased. In 2008 the New York Historical Society mounted an exhibition, 'Drawn by New York: Six Centuries of Watercolors and Drawings', based on its own collections and including Captain Watson's sketch-book among the accompanying artefacts on show. One critic, writing in Art Times, advised visitors to be sure to stop and look at Joshua Rowley Watson's book, which he described as one of the many gems in the show. When the same exhibition was presented a year later in Poughkeepsie, a critic in the New York Times also commented on Captain Watson's sketch-book. (This time visitors were able to see the contents of the sketch-book via digital scans on a computer.) He wrote that Watson, trained in topographical draughtsmanship, 'had skills as an artist and made an important contribution to American landscape painting'.